As regular readers will know, HRI has been investigating the sordid world of the Spanish cluster bomb industry. Now Spanish officials (not known for releasing specific information about arms exports) have reportedly claimed the cluster bombs found in Misrata, (type MAT-120 made by Instalaza) were never exported to the USA.

However, they refuse to provide the actual evidence, documents, licenses, end-user certificates and so forth and are not letting anyone know where all the missing cluster bombs have actually gone. 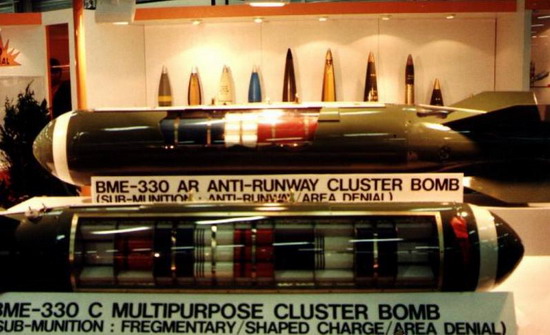 The Spanish government officials face something of a credibility deficit, after decades of hiding the truth from the public, so it is best not to give too much credence to what they say. Nevertheless, we have already explored some of the issues around Spanish bombs and new information sheds light on the claim that no cluster bombs were exported to the USA.

In Andalucia, close to El Puerto de Santa Maria, is a facility known as US Naval Station Rota. The people of the locality have been coming out to march for peace and against the base for the past 23 years: 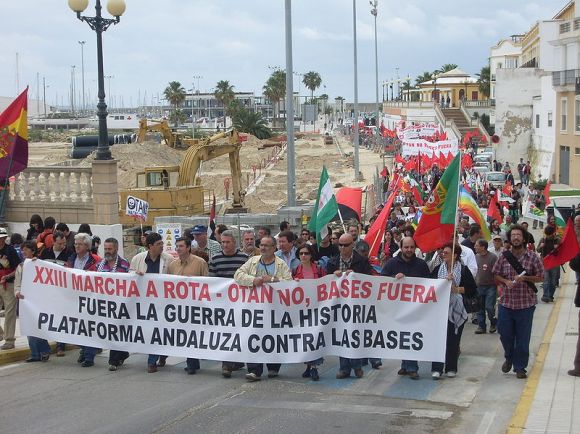 NATO no - Andalucia against the base!

Naval Station Rota is an important supply base for the Americans, described by them as the “Gateway to the Mediterranean.” US Navy ships use Rota for all kinds of naval supplies, including bombs and ammunition.

The Naval Station is the only base in the Mediterranean capable of supporting Amphibious Readiness Group post-deployment wash-downs.

USS Ponce (pronounced pon-say) stopped off at Naval Station Rota, following her deployment off the coast of Libya, following the bombing of Misrata, following the sacking of her Captain Etta Jones and First Officer Kurt Boesnich and before making the trip back across the Atlantic. 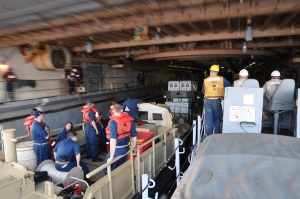 The US Navy is the tenant of a 21 sq km section of the 24 sq km base, but the base is used jointly by Spain and the United States. It remains under the Spanish flag and is commanded by a Vice-Admiral of the Spanish Armada. Until recently the commander of the US section of the base was a Captain William Mosk.

NAVSTA Rota is technically a tenant of the Rota Spanish Armada base, although no rent is paid. So if Instalaza and Expal’s bombs were delivered to Rota, it seems quite possible that government officials would consider it within their rights to claim the weapons were never exported to the USA.

So, was the use of cluster munitions in Misrata perhaps an operation with a dual purpose? To help win Misrata for the rebels, using weapons favoured by the US military, which could simultaneously be blamed on Libyan loyalist forces? It would be tempting for a coalition commander or psychological operations unit, particularly with a stockpile of suitable weapons so close at hand. We have already seen the importance that Admiral Stavridis places on the information war and governing the internet.

On the other hand, is it possible that the Libyan army or rebels used these weapons?

Or perhaps it was all just a mistake – with the shortage of ammunition perhaps these rounds, having lain in storage for years, were brought into action without any thought for the political consequences. Perhaps those immediately responsible were sacked in the aftermath, on various pretexts; but given a supine and pro-war media the powers that be decided they could get away with covering up the whole business up?

One thing we can be absolutely sure of is that Richard Kidd, Director of the Office of Weapons Removal and Abatement, U.S. Department of State, wrote in “Is There a Strategy for Responsible U.S. Engagement on Cluster Munitions?” April 28, 2008:

“Cluster munitions are available for use by every combat aircraft in the U.S. inventory, they are integral to every Army or Marine maneuver element and in some cases constitute up to 50 percent of tactical indirect fire support.”

Also we have seen a number of high profile sackings of US Navy officers a few days after the bombing of Misrata, including the captain and first officer of the USS Ponce on April 23rd.

In addition we also find in Stars and Stripes that on 18th April 2011:

The commander of the U.S. Navy base in Rota, Spain, has been relieved of command after Navy leadership lost confidence in him to “effectively handle issues surrounding an ongoing investigation under his authority,” a Navy spokesman said Tuesday.

Benham declined to provide any information about the ongoing investigation, being led by the Naval Criminal Investigative Service.

The Human Rights Investigations (HRI) probe into the actual facts continues, notwithstanding the propaganda pumped out by governments and the media. Unlike others, who have jumped to conclusions on the basis of emotion, HRI continues to question, to discover more evidence and bring that to our readers attention so they can make up their own minds.