Human Rights Watch (HRW) Executive Director, Ken Roth, and New York Times (NYT) journalist CJ Chivers, were quick to argue the UN report on the alleged use of chemical weapons in Ghouta proved the Syrian regime forces launched the attacks. However, analysis of the report suggests HRW and the NYT’s argument is flawed and illustrates that, as in Libya, where the opportunity for US air strikes presents itself, HRW displays militaristic (“responsibility to protect”) impulses and functions as a willing vehicle for pro-bombing propaganda.

HRW’s argument is set out by Ken Roth on Twitter:

The chemical rocket vectors give the lie to #Syria govt's denial of responsibility for Aug 21 attacks. And #Russia's. http://t.co/0leg8DU4vw

Roth links to an article in the New York Times by Mr Chivers. In his article, Chivers sets out his reading of the UN Inspectors Report saying, “At one impact site, investigators found both the place where the rocket had passed through a “vegetal screen” above a wall just before it hit the ground, and the small impact crater itself.”

According to Chivers the UN Inspectors noted that “the line linking the crater and the piercing of the vegetal screen can be conclusively established and has a bearing of 35 degrees.”

However, the UN report says, in Appendix 5: “Noting the location of the impact crater and other damage to the upper parts of the existing fence/trellis-work, the inspectors followed the trajectory of the rocket and determined that it initially impacted the corner of the second floor of an adjacent apartment building to the east, with either the warhead functioning or shearing off from the body at that point and the motor section having sufficient kinetic energy to continue along its path to its terminal impact location.”

The report is clear that this rocket is the one which has been identified as being an M14 rocket, long since superceded by more modern weaponry, with markings which indicate it was manufactured in a factory in Siberia in 1967.

Now, clearly, if a rocket hits a building, the bearing (or azimuth) at which it subsequently crashes through a vegetal screen or trellis into the ground is not going to be a very accurate indication as to where it is fired from.

However, Chivers tells his readers that according to the inspectors, “These azimuths, or compass bearings, they noted, can be reversed to show the direction from which the rockets had been fired.”

In fact, the UN Inspectors indicate the azimuths can be reversed to show “the original trajectory of the projectile, as it hit the ground.”

Now the UN Report is not written as clearly as it might have been, which may be due to language problems, different parts being written by different people or last-minute editing due to various considerations (including perhaps Ban Ki-Moon’s ill-advised trailing of its findings). It appears that HRW believes two rockets and two impact locations were found in Moadamiyah, the source of which in the UN document would be the statement that “Impact Site Number 2 is located 65 meters away from number 1 and with an azimuth of 214 degrees, Both relative positions are fully congruent with the dispersion pattern commonly associated with rockets from a single. multibarrel, launcher.”

To back up the Chivers / HRW reading of the UN Report, HRW have produced a map, which is reproduced below: 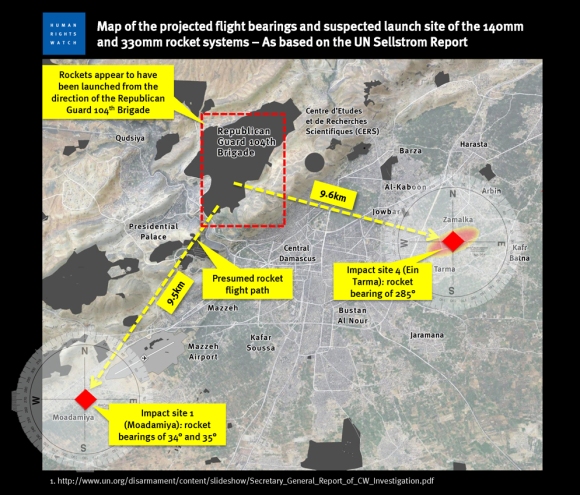 If there is indeed one rocket with two impact points, then HRW’s presumed rocket flight path to Moadamiya is purely speculative and, on the basis of the UN Report, it is just as likely the rocket arrived from rebel-controlled areas to the east. Whilst some have focused on the fact that the M14 rockets and their associated (BM-14 etc) launchers have not been spotted in rebel hands, less well publicised is the fact that there are as yet no documented uses of these rockets and their associated launchers by either side, as confirmed by blogger Brown Moses who has been examining literally thousands of hours of footage of the Syrian insurgency.

It is worth mentioning that the flight path posited by HRW and the NYT would take this obsolete rocket, filled with one of the most poisonous substances known to man, perilously close to the Presidential Palace and the final impact zone is not far from the Syrian Army base in Mazzeh Airport.

What of the presumed flight path into Ein Tarma? Well, according to the UN Report, the trajectory of one of the rockets fired into rebel territory could be ascertained from the position in which it landed as it remained dug in, undisturbed after landing in earthy, relatively soft ground. (We’ll be looking into the clear evidence of manipulation of the crime scenes in a later post).

HRW argues that the direction of this rocket’s travel indicates it was fired from the sprawling Republican Guard 104th Brigade base which they say is 9.6 km away. However, the idea that this rocket, which has been described as a flying garbage can full of between 50 and 62 litres of liquid Sarin, could travel that distance is purely speculative. Amateur attempts to model the rocket’s flight suggest a range in the region of 2.5km. The alleged rocket impacts in East Ghouta are around 2.5 – 3 km inside rebel lines, measured from the front line in Jobar. The UN should arrange for the device to be studied by rocket scientists to ascertain the facts as to its capabilities, but there is no doubt that the HRW analysis is deceptive in pretending the evidence set out in the UN Report precludes the possibility these rockets were fired from within rebel-held territory.

On September 16th Chivers wrote in the NYT: “For rebels to have carried out the attack, they would have had to organize an operation with weapons they are not known to have and of considerable scale, sophistication and secrecy — moving the launchers undetected into position in areas under strong government influence or control, keeping them in place unmolested for a sustained attack that would have generated extensive light and noise, and then successfully withdrawing them — all without being detected in any way.”

Chivers then explicitly links this analysis to the UN Report and his (mis)-reading of it saying, “One annex to the report also identified azimuths, or angular measurements, from where rockets had struck, back to their points of origin. When plotted and marked independently on maps by analysts from Human Rights Watch and by The New York Times, the United Nations data from two widely scattered impact sites pointed directly to a Syrian military complex.”

The importance of the HRW/Chivers intervention in influencing the terms of the debate can be seen in the words of Secretary of State John Kerry who said on September 19th “The world can decide whether it was used by the regime, which has used chemical weapons before, the regime which had the rockets and the weapons, or whether the opposition secretly went unnoticed into territory they don’t control to fire rockets they don’t have containing sarin that they don’t possess to kill their own people. And then without even being noticed, they just disassembled it all and packed up and got out of the center of Damascus, controlled by Assad.”

If the New York Times and Human Rights Watch analysts have made an honest mistake in their reading of the UN Report they need to admit that immediately and issue substantive corrections. If there has been, or continues to be, a deliberate misleading of the public on the contents and implications of the UN Report then the position of Ken Roth as head of Human Rights Watch is clearly untenable.

Note that besides the ridiculous range estimate for the rocket, the azimuth calculation is completely wrong. see full analysis here: http://whoghouta.blogspot.com/2013/09/the-un-report.html

[…] sites and the confusing writing of the initial report which gives prominence to two rocket azimuths as we have examined and which has opened the door for the Ken Roth’s Human Rights Watch, the New York Time other […]

[…] the evidence they have gathered. HRI has covered much of this issue before, but my previous article tried to cover a lot of ground, so I will now concentrate on the pivotal evidence presented in the […]

[…] interim UN Report by Professor Sellstrom and his team was published, which was interpreted by those favouring US cruise missile strikes as a veiled indictment of the Syrian […]