As reported here yesterday, Paris Match claim to have taken a photograph of the BUK system, widely believed to have shot down MH17:

According to the French magazine, the photograph they took was taken as the BUK and trailer were arriving in Snizhne on the morning of 17 July, a few hours before the crash of the Malaysia Airlines MH17. (“en train d’arriver dans la ville de Snijne le matin du 17 juillet, quelques heures avant le crash du vol Malaysia Airlines MH17.”)

Paris-Match claimed it was taken by their team of photographers in Snizhne, but it turns out to have been taken in Donetsk, 75km away:

We know this because the phone number on the truck panel (050 471 4180) leads straight to this construction company:

According to Paris-Match, the proprietor of this establishment claimed “rebels” had stolen a number of his vehicles earlier in the month. If we go from here to towards Snizhne we find the location of the Paris-Match photo, near a car dealership on Makiivske Highway on the outskirts of Donetsk:

Now, this BUK and trailer may well be the same ones seen in the towns of Zuhres, Torez and Snizhne on the day of the crash, and which have been widely suggested as the probable launch vehicle.

Paris-Match also included the infamous Lugansk video, which was published by the SBU (Ukrainian equivalent of the KGB) and which the SBU claimed was taken in Krasnodon, near the Russian border, when it was actually taken in Lugansk (at an unknown time) at an intersection and on a route which is not a logical route to Russia.

After informing Paris-Match of the mistake regarding the video location, the author of the article Alfred De Montesquiou has now got back and explained:

Hello, indeed, it appears there was a mixup in caption : the picture was taken leaving Donetsk on road to Snijne, not in actual Snijne

I’d like to recommend another article by Alfred De Montesquiou relating to the situation in Ukraine.

Paris Match have amended their article to confirm that the photo was taken in Donetsk. However, as of 29/07 they still have not corrected the Krasnodon location for the video.

1) Paris Match have said that their photographers took this vital photograph.
2) Paris Match say there was some kind of mix-up in locations accounting for them saying it was in Snizhne rather than Donetsk (75km away).
4) This is an incredible error to make in a matter of this seriousness, but these things do happen.
3) We have pointed out Paris Match’s error with regard to the SBU-provided “Krasnodon” clip – actually in Lugansk – but they still haven’t corrected it, saying this is because it was officially provided information.
4) We have asked Paris Match for a copy of the photograph to check EXIF data etc and will update everyone when we receive a response.

Update 5/8/2014
Alfred De Montesquiou has told HRI that it was coincidence that the BUK was seen by Paris Match on that morning as lots of journalists were heading out towards Snizhne that day as there was fighting in the area.

Update 5/8/2014 The company from whcih the truck was allegedly stolen appears to be a construction compny (not truck hire) http://3051562.biz-gid.com/ (h/t SZ on bellingcat)

Update 28/09/2016 The JIT investigation team provided a copy of the original video from which the “Paris-Match” stills were extracted today (relevant section at 3.10):

It is clear from this footage that the images were not photos but from a hand operated video camera. At the end of the footage the operator moves the camera down below the dash, as if not to alert any of the occupants of the convoy that they were being filmed.

13 replies on “Paris Match on the location of a BUK”

Perhaps the whole affair here is to keep attention on Buks, while the evidence points out to Su-25 and air-to-air rocket R60? ask Germans, they even pointed out who flew it;

Last development by German expert yesterday is not Su-25 AAM R60 but it’s 30 mm anti- tank gun with explosive rounds used against MH17’s cockpit. High definition picture of one element of cockpit on the crash site, just under the pilot lateral window (starboard), show round holes which according to that expert are due to the 30 mm anti tank rounds, and the projectile that made those round holes went outwards (coming from port side), that explains the edges of that hole bent outwards. Hence the ” decompressive explosion” of the official narrative to distort the facts and try to explain the elements. Hence the desperate efforts of the Ukrainian military these days to access the crash site in order to plant “proofs” going the “right way”, regarding that narrative.

Thank for the information Benoit. Have you got a link to that expert and a photo?

The 30mm cannon claim is nonsense and the same goes for air-air-missile damage. The likes of R-60, R-73, R-27 air to air missiles use continuous rods. This is what 30mm cannon damage looks like.

See following fragmentation warhead damage on an A-10 Thunderbolt II during Iraq 2003.

The damage on MH17 is consistent with what a fragmentation warhead does as in the case of the A-10.

Sorry I did not come back on this thread until now : pictures of the cockpit debris are from Jeroen Akkermans and can be seen on Flickr (they were shot a few days after the crash). I also have to correct a few mistakes of my former post : Cockpit debris are not port side of the plane but left side (starboard), pilot’s side. And it’s not so evident that they’re bent outwards (a closer look at Akkermans picture shows that the inner left part of some holes is bent inwards, whereas the outer hull – cockpit is reinforced and has two layers – is bent outwards on the right, so it’s a little bit more complex than that …). What we can say is that on Akkermans pictures, some holes are “round” (more precisely : elliptic), whereas missile shrapnel has a square shape a little bit like chocolate tablets. So, the round (and lined up) holes (I’m not writing about all the holes, but just those 4 or 5 lined up holes) seem to be done by bullets, and not shrapnel. See the pictures here : 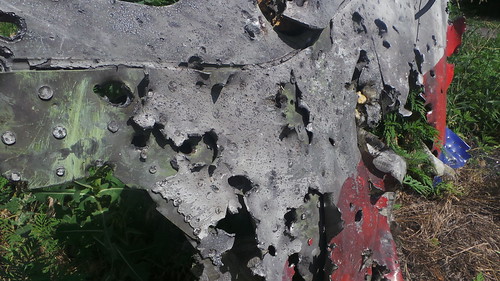 Concerning the german expert : his name is Peter Heisenko, but I think that he’s not factual enough in his statement : we need a more precise analysis of the damage pattern by an ammunitions expert, and not just relying on the fact that accprding to some, Heisenko is an “expert” (he’s a pilot, not an ammunitions expert …). Let’s not make the same “mistakes”, as western “journalists” …

Excellent, thanks! This has been included by ACLOS here
I agree the ‘mix-up’ would be unlikely. Rather, they didn’t take the photo and were told the wrong place. It was handed in. So who took it? Why did the “thieves” fail to remove the phone number of the guy with that story? Etc. Did you know about the missile base just a few km north of there? App. government-held, one of only 3 or so such places in Ukraine with BUK-type systems. Russia says they moved away / to/away from other areas to the east, around Snizhne. on July 17. Too much hassle with all links, see for all (so far, we’re behind): http://acloserlookonsyria.shoutwiki.com/wiki/Category:MH17

Hey … I can say location is likely enough to proceed trying to measure the shadows. I get various readings for both altitude and azimuth, coming out to, best reading, 11:15 AM local time, +/- 7 minutes. Likely stopped in the pull-over lane, waiting for something before leaving Donetsk … we can see he’s being filmed. Is that all he was waiting for? (see same page, updated)

Petri’s following the machine gun evidence at ACLOS – I’m letting him head that for the moment. nothing to add. Clearly it would be pivotal. See forensics page, elsewhere…

[…] truck looks very similar to the truck photographed by Paris Match on the morning of the downing of MH17, on the way out of Donetsk but with the yellow panel showing […]

To add:
1) the time I estimate might mean this photo was also taken a different day – compared to Torez photo, app. 11:40 AM (I concur with the Higgins crew on that), 11:15 is an impossible connection to make even if it started moving right after the photo. Too close to be sure though without a more careful check, but might be a clue.
2) The alleged SBU wiretap audio from right after the incident has the plotters talking about taking the BUK to just this spot after the roundabout, which is supposedly a major separatist checkpoint (see here.) This photo tries to show the truck resting just after passing through.

The veracity of that recording needs challenged well now … the day too early claim did not pan out, so it won’t be that easy. Has anyone really done a good analysis tearing it apart some other way? Could it even be legit, with some local people tricked by some undercover (wire-wearing, not wire-tapping) supposed defector delivering it “with a team” coming “from Russia”? Who knows?

Who knows, indeed. If you listen to the tapes (especially the first one), the scenario of “the perfect false flag” is still in play.

[…] by Bellingcat, the brain trust of former underwear-company accountant Eliot Higgins, and there was never any ‘detection’ of any such anti-air system “leaving Russia and returning short one missile”. […]