High treason, barbarity and the importance of the Geneva Conventions in Libya 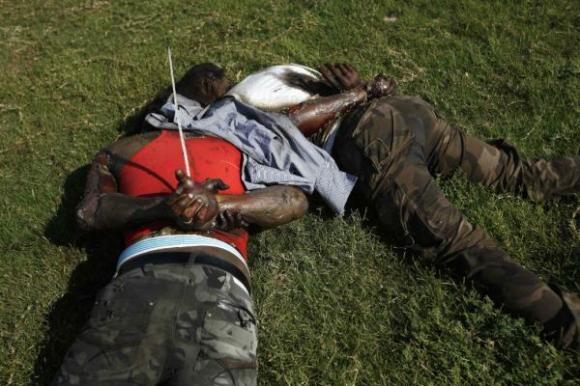 As the rebels entered Tripoli bodies littered the streets. These black men had their hands tied behind their backs.

“The soldiers and officers who will not heed this last call will be accused of high treason.”

The invocation of high treason in civil war (“non-international armed conflict”) situations is a highly disreputable manoevre designed to deny any legal obligations to adversaries due under international humanitarian law and the Geneva Conventions of 1949 and the Additional Protocols of 1977.

It is worth noting the irony given that

The dangers of the path being pursued by Ahmed Bani (and his NATO advisors presumably) is that this course of action (and this is well established in the annals of history), tends to lead to a situation where each side:

“sinks into barbarity and tries to outdo each other in the cruelty of their reprisals.” (Bluntschli, Das moderne Völkerrecht der civilisirten Staaten als Rechtsbuch dargestellt, 1868,288, para.512)

Common Article 3 to the Geneva Conventions of 1949 sets minimum standard for the use of civil war opponents:

In the case of armed conflict not of an international character occurring in the territory of one of the High Contracting Parties, each Party to the conflict shall be bound to apply, as a minimum, the following provisions:

1. Persons taking no active part in the hostilities, including members of armed forces who have laid down their arms and those placed ‘’hors de combat” by sickness, wounds, detention, or any other cause, shall in all circumstances be treated humanely, without any adverse distinction founded on race, colour, religion or faith, sex, birth or wealth, or any other similar criteria.

To this end, the following acts are and shall remain prohibited at any time and in any place whatsoever with respect to the above-mentioned persons:

(a) violence to life and person, in particular murder of all kinds, mutilation, cruel treatment and torture;

(b) taking of hostages;

(d) the passing of sentences and the carrying out of executions without previous judgment pronounced by a regularly constituted court, affording all the judicial guarantees which are recognized as indispensable by civilized peoples.

2. The wounded and sick shall be collected and cared for.

Given the situation on the ground in Libya, and the certainty of further atrocities if a ceasefire and negotiated solution is not found, and the real danger of genocide against certain tribes, Human Rights Investigations again appeals strongly for an immediate end to the NATO bombing, (which has unfortunately just been extended) a ceasefire and negotiated end to the conflict.